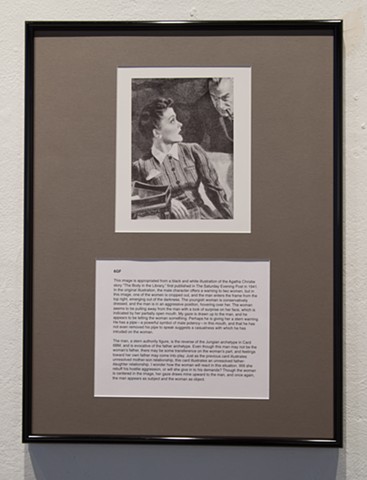 This image is appropriated from a black and white illustration of the Agatha Christie story “The Body in the Library,” first published in The Saturday Evening Post in 1941. In the original illustration, the male character offers a warning to two women, but in this image, one of the women is cropped out, and the man enters the frame from the top right, emerging out of the darkness. The youngish woman is conservatively dressed, and the man is in an aggressive position, hovering over her. The woman seems to be pulling away from the man with a look of surprise on her face, which is indicated by her partially open mouth. My gaze is drawn up to the man, and he appears to be telling the woman something. Perhaps he is giving her a stern warning. He has a pipe—a powerful symbol of male potency—in this mouth, and that he has not even removed his pipe to speak suggests a casualness with which he has intruded on the woman.

The man, a stern authority figure, is the reverse of the Jungian archetype in Card 6BM, and is evocative of the father archetype. Even though this man may not be the woman’s father, there may be some transference on the woman’s part, and feelings toward her own father may come into play. Just as the previous card illustrates unresolved mother-son relationship, this card illustrates an unresolved father-daughter relationship. I wonder how the woman will react in this situation. Will she rebuff his hostile aggression, or will she give in to his demands? Though the woman is centered in the image, her gaze draws mine upward to the man, and once again, the man appears as subject and the woman as object.